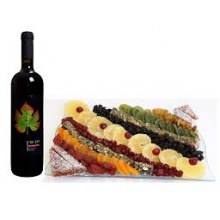 'Sulphur Dioxide' may not sound good enough to consume but they are randomly used in a number of edible items. Sulphur dioxide is one of the fourteen new  food allergens that you must be aware of before December 13th 2014. Sulphur dioxide contains 'sulphites', which may lead to various health problems. Sulphur dioxide is used as a preservative in several beverages and food to help against bacterial attack or any various other forms of deterioration. They are necessary to keep food safe but unfortunately people are becoming allergic to these compounds. In traditional times, vinegar, sugar and table salt were used as preservatives that don't lead to any kind of allergic reactions but in recent times, sodium benzoate, sorbic acid and sulphur dioxide are used to preserve food.

According to Dr Gregory Moller of the University of Iowa reports; 'Dried fruits are among the foods highest in sulphities, with raisins and prunes containing between 500 and 2,000 parts per million. Other dried fruits also contain sulphiies including prunes, and dried apricots. In addition, U.S. Food and Drug Administration mandate that food containing sulphites must be mentioned on the food label. In order to avoid sulphites in dried fruits, it is recommendable to always go for an organic brand that does not apply preservatives like sulphur dioxide.

Sulphur Dioxide as a Preservative

Sulphur dioxide plays a great role in preserving foods. They are also used in the production of wines but besides these, there are several other foods that may contain sulphur dioxide. Some of them may include

and many more. If you are unsure when severing food to the public or to your customer, always check with your food supplier.

Sulphur dioxide is an irritant gas that causes airway to become more constrict and irritated. When it gets interacted with the stomach, it leads to Sulphite Allergy. Some of the symptoms includes:

swelling of the mouth and lips

If you already suffer from asthma this can lead to an attack. Just to mention, consuming foods that contain sulphur dioxide does not cause asthma.

I am currently putting together a 'Sulphur Dioxide Allergy Report', which you will be able to download from our website, very soon